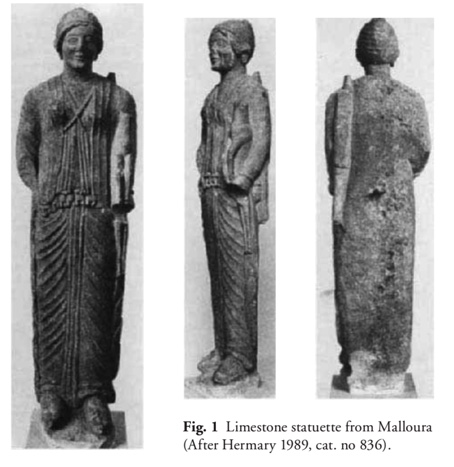 The evidence of the goddess Artemis is sparse in many regions of the ancient world, and Cyprus is no exception. Her cult on the island is attested by a few inscriptions and a limited number of local limestone statuettes repre- senting her as we know her from Greek iconography. Over the years the available evidence has been discussed in a number of cases,1 and the follow- ing contribution is merely a short overview of the evidence available.

A somewhat strange Archaic terracotta from Kourion has tentatively been interpreted as a figure of Artemis,2 but it stands alone and the frag- mentary object preserved on its back cannot be positively identified as a quiver. Representations of the goddess as we know her from Greece appear together with those of other Greek gods during the 5th century BC, but the extant material concerning Artemis mostly belongs to the Hellenistic period, when local limestone statuettes depict her in particular as Artemis the huntress and protector of animals, shown with a bow and a quiver and an animal identified as a hind, a fawn or a deer and a lamb.