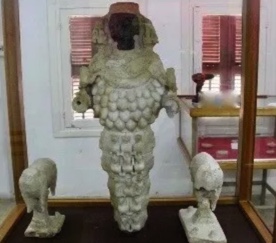 Artemis Ephesia was the tutelary goddess of Ephesus, a city at the Western coast of Asia Minor. Her temple, the Artemison, was known as one of the seven wonders of the ancient world. Her cult statue out of wood is lost because of its perishable material, but it is recorded in both ancient literature and numerous representations in different media. Several cities depicted the image of the cult statue of Artemis of Ephesia on their coins.1 Inscriptions and images discovered outside of Ephesus, across wider the Mediterranean, testify the widespread reception of her cult throughout the antiquity.

No evidence of Artemis Ephesia from Cyprus was known till date. On 7th of August 1980 Sergio Galloni, an Italian artist and tourist, discovered a marble statuette with two accompanying animal figures while diving in the inshore waters of Salamis, approximately in the line of the public beach Koca Reis.2 The Department of Antiquities and Museums of the TRNC, Famagusta/Gazimağusa, was immediately notified of the find and the statuette was brought to the museum of Morphou/Güzelyurt.3 This paper is the first publication of this discovery.4 It will provide a description of the statuette and try to place it in its religious and art historical context. This new find does not only expand the evidence known on the Ephesian Artemis, but also contributes to the understanding of the plurality of religious life in Cyprus.