What was Scythian about the “Scythian Diana” at Nemi?, Pia Guldager Bilde 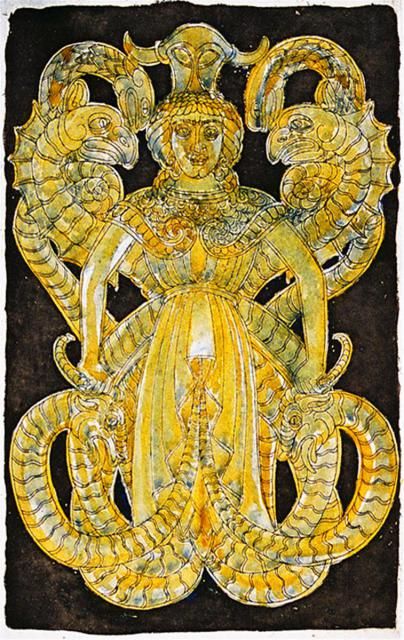 What was Scythian about the “Scythian Diana” at Nemi?

The main aim of this paper is to ask, when and why Diana Nemorensis in her Central Italian sanctuary by Lake Nemi was conceived of as the “Scythian” Artemis/Diana and why her cult was thought to originate in the land of the Taurians.

The Sanctuary of Diana Nemorensis, that is “Diana of the Sacred Grove”, is situated by Lake Nemi in the Alban Hills, just 25 km southeast of Rome. It was one of Italy’s most important sanctuaries - and certainly one of the largest and richest. Strabon provides us with the longest and most precise description of it preserved from antiquity (5.3.12): “...to the left of the way as you go up from Aricia, lies the Artemisium, which they call Nemus. The temple of the Arician [Artemis], they say, is a copy (άφίδρυμα) of the Tauropolos. And in fact a barbaric, and Scythian, element predominates in the sacred usages, for the people set up as priest merely a run-away slave who has slain with his own hand the man previously consecrated to that office; accordingly the priest is always armed with a sword, looking around for the attacks, and ready to defend himself” (translation: H.L. Jones).

We shall return to the sanctuary at Nemi and its cult later. But first: who was Strabon’s Tauropolos, and why did he described the cult in the Sanctuary of Diana by Lake Nemi as having “barbaric and Scythian elements”?