THE TEMPLES OF ZEUS AND ARTEMIS AND THEIR RELATION TO THE URBAN CONTEXT OF GERASA, Dr. SHAHER RABABE’H 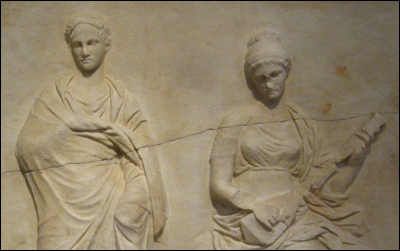 IV.b The Temple of Artemis complex

The Sanctuary of Artemis lies at the centre of the city, on a large hill at a height of some 25 m above the colonnaded street, and sprawls over 34000 m. square (Fig.1). There are many points which are of interest about this complex. The natural slope gave potential for an important internal connection, particu- larly in terms of access. This added to the possibility of a good view and other exposure of the site, depending on its elevation. It was one of the most mag- nificent sanctuaries known in the ancient classical world. It forms an elaborate complex consisting of three architectural components. The first is the sacred route that started on the east bank of the river and crossed the river on the north bridge. At the end of the bridge on the west bank, a monumental stair- case led up into a triple gateway, which opened onto a colonnaded rectangular enclosure, measuring 38 m long and 11 m wide, ending at the west in a small staircase leading to the propylaeum plaza, which was flanked by two exedrae in the north and south elevations. It takes the form of a butterfly-shaped trape- zium, which opened to the west onto the Cardo through another gateway. This propylaeum plaza with the eastern rectangular street was reused as a Byzantine church in the sixth century (Segal 1997:120-4; Khouri 1986: 98-102). However, the original Roman structure dated to AD 151.

From the propylaeum plaza, the sacred route crossed the Cardo and continued on the same axis to the temple via a series of gates, staircases, and ter- races (Fig. 1). The first porch consists of four massive Corinthian columns, each measuring 1.42 m in diameter and 16 m in height. These four columns stand on the same line as the west colonnade of the Cardo Maximus, but they are much higher than those of the colonnades on either side, in order to indi- cate the position of the sanctuary gate. There were thirteen columns on each side, together with the porch columns marking the 120 m long eastern eleva- tion of the sanctuary. To the west of these massive columns the main gate of the temple rises consisting of four large columns standing in front of four piers to form a monumental triple gateway at the bottom of the staircase. The central doorway is about 5 m wide and 9 m high, while the two side doorways are each 3.8 m wide and 4 m high. This gateway was decorated with niches over each side door and topped by a triangular pediment; the four columns bear an architrave, a frieze, and a pediment. From this gateway a monumental staircase composed of seven flights, each of seven steps leads to the lower terrace (Fig.1).

The lower terrace is rectangular; it is 14 m above the level of the Cardo, and supported to the east by the retaining wall, which forms a row of two storey shops along the Cardo. Using the height of the shops, the architect solved the problem of the difference of level between the temple building and the Cardo pavement. Another monumental staircase, 105 m wide, lies to the west of the lower terrace, composed of three flights each with three steps, separated by landings until it reaches the level of the upper or temple terrace. The front ele- vation consists of a row of twenty-two Corinthian columns, flanked by a square tower in each corner. Beyond that, the second rectangular terrace measures 161 m in length and 121 m in width, dominated by the temple building and sur- rounded on all four sides by colonnades, 36 columns in each north and south side, and 26 columns in each east and west. The north and south colonnades are composed of small rooms and exedrae, which are fronted by two columns, and separated from the colonnades by a passageway. The temple itself, of the clas- sical peripteral type, is hexastyle, with eleven columns along the side. It stands on a moulded podium, 4.32 m high. The temple measures 22.6 m wide and 40.1 m long, and faces the open-air altar. In addition to the appearance of the two flanked towers as Oriental origin, Lyttelton analysed the form and sequence of the mouldings of the entablatures of propylaea and found indications for a local style closely allied to that of Baalbek (Lyttelton 1974: 247-8; Ward- Perkins 1981: 337). This presents an extraordinary mixture of classical and Oriental architectural elements.