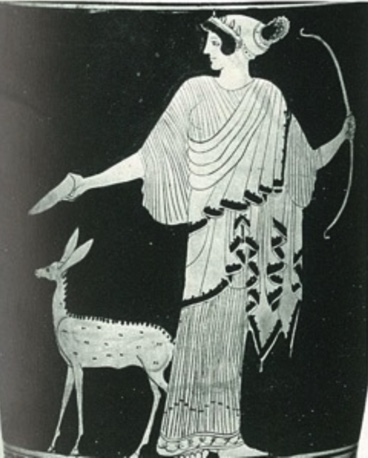 The Archaic Potnia Theron schema depicts a central female figure grasping an animal in each hand. She is often associated with the goddess Artemis. Yet, evidence from the early Archaic period indicates that she was not yet associated with the goddess. The identity of the schema has been the subject of a number of studies, and the connection of the figure with Artemis is well ingrained in scholarship. The identification of the figure as Artemis relies heavily on a brief description from Pausanias’s Perigesis, and the epithet Ποτνία Θηρῶν given to Artemis once in the Iliad (Hom. Il. 21.470). Furthermore, the image was later attributed to the goddess Artemis on account of her affiliations to wild animals. However, this thesis investigates the identification of the figure and examines the evidence (or lack thereof) for the attribution of the figure to Artemis in the Archaic period.

Chapter One will investigate the Potnia Theron schema and its use in the Bronze Age. It will consider the possible contribution that the Bronze Age schema may have had on the image in the Archaic period, acknowledging possible influence from the Near East. It will also discuss problems with Archaic source material, the fluidity of Archaic Greek religion, and the characteristics of the Archaic Potnia Theron schema. Chapter Two will analyse the sanctuary of Artemis Orthia in Sparta as the main case study for the use of the Archaic schema in a sanctuary context. The chronology at the site, and its examples of the schema make it particularly useful for this investigation. Chapter Three will follow with an analysis of the schema on items lacking contexts, as it was used for decorative purposes on vases, jewelry, and plaques. Finally, Chapter Four will examine the role of Artemis, how the Potnia Theron pose has since been interpreted to represent the goddess. This thesis will determine when the schema became associated with Artemis and investigate evidence for its use prior to this association.