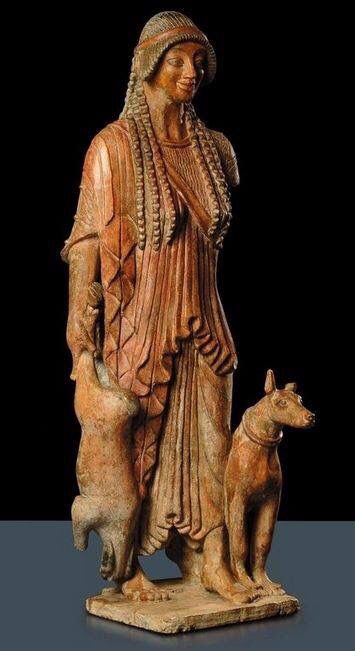 The discussion on Etruscan religion and deities (aiser) remains very abstract, unless we define time and place. The way the Etruscans dealt with religious matters was praised by ancient authors, though they cannot have fully understood it. A massive Greek impact is clear especially in the coastal territory, which has led many to believe that the Etruscans were entirely Hellenized. Countless depictions show that Greek myths were, indeed, adopted and well-known to the Etruscans, but not always in com- plete contexts, and the gods themselves were composed of more complex elements. A major characteristic of the Etruscans was that they adopted, rather selectively, not only ‘foreign’ material goods, styles and iconogra- phies, but also ideas, whether belonging to the secular or the sacred world, and adapted them to their own culture.

The Etruscans organised themselves in city-states (Fig. 1), each of them with its own specific features. Thus the material culture exhibits consider- able differences from South to North, and from the coastal areas to the interior of Etruria. While the Greek impact has always been recognised, too little focus has been given to the Etruscan selection from Greek and especially Attic idioms and iconographic schemes. Here we wish to discuss the extent and limits of the Greek – iconographic and religious – impact on the anthropomorphisation of the Etruscan gods, confined to one, seemingly imported, Greek goddess, Artumes.