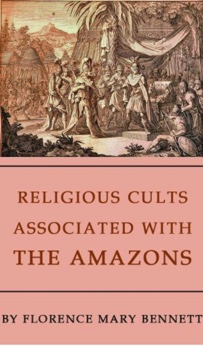 "Bennett's thesis explores the possible religious beliefs of the Amazons. She examines the legend of the Amazons and many of the goddess cults of ancient Greece and Asia Minor (Turkey). Her research is, as befits a scholarly paper, extensively documented. The footnote to text ratio is extremely rich.

Bennett describes in great detail what is known about ancient goddess worship through primary documents. She describes many details that are taken for granted today, such as the double axe symbol, and some aspects that are not so well understood. For instance, some of the male deities of later classical Greek religion turn out to originally be of ambiguous gender. And Aphrodite, who in later mythology is a love goddess, was originally a war goddess.

Whether or not the Amazons were literal history or belonged to the realm of pure mythology, they left an indisputably huge trace in classical literature. This monograph is a superb summation of this evidence."