The Cult of Aphrodite at Aphrodisias in Caria, Lisa R. Brody 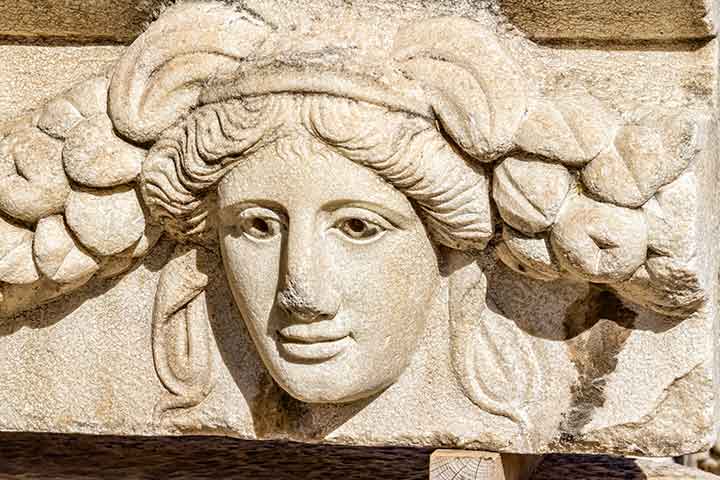 The Cult of Aphrodite at Aphrodisias in Caria

Graeco-Roman Asia Minor offers partieular interest to scholars of ancient cult and religion, because many local Anatolian gods and goddesses at that time became identified with members of the Olympian pantheon, deities who had been introduced through increasing contact with mainland Greece and Italy. Although they came to be known by a variety of different names - Artemis, Aphrodite, Zeus, Hera - the connection among these divinities is shown by specifie similarities in their powers and attributes; many of them, for instançe, had associations with fertility, warfare, vegetation, and animaIs. They probably originated as aspects of a universal, mother-type goddess, becoming identified in later periods with a variety of Greek and Roman counterparts. The Artemis of Ephesos, for instance, began as a local Ionian goddess called the Mistress, "Despina" in Greek, and it was in later periods that she became known as an unusual aspect of Artemis. Whereas Artemis seems to have been the most popular Greek deity in much of Asia Minor, partieularly along the western coast, sanctuaries in other regions chose instead to identify their local goddesses as Kybele, Hera, or Aphrodite. Caria, in partieular, seems to have preferred Aphrodite above aU others.

The best- documented case of this appears at Aphrodisias, a city whose very name from the Hellenistie period onward signifies the importance of its goddess's cult. It is not surprising that the Great Goddess of Asia Minor was often associated with the Greek Aphrodite. Many scholars of Classieal religion suppose that Aphrodite actually originated in the East, and even in antiquity writers such as Herodotos noted the similarities between Aphrodite and goddesses such as Astarte, Ishtar, and Inanna. Like the Aphrodisian goddess, these Mesopotamian deities represent fertility, love, and power in warfare. The Great Goddess in Anatolia is most often known as Kybele ar Kubaba, and there are many similarities between Kybele and Aphrodite in myth. Both goddesses, for instance, have unfortunate relationships with martal men: Attis and Adonis, respectively.