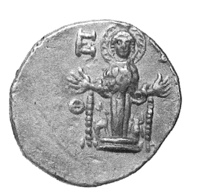 Artemis of Ephesos may or may not have many "breasts," a debatable point, but she certainly has two faces, or more properly, two bodies in both iconography and literature.

One body is that of the traditional virgin goddess, the huntress of myth, as found in other Greek poleis. The other body, despite the sweet virginal face resembling that of her outdoor name- sake, seems to belong to an ancient Anatolian goddess. In one form Artemis skirts over the mountains in a light tunic; in the other she stands rigidly imprisoned in a ponderously embroidered type of straightjacket, the "ependytes".

She seems to struggle to lift her arms, heavily weighed down by what the Fathers of the Church identified as breasts, and unable to take a step. Whatever the body language involved, both forms apparently belonged to the same person, at least in the late Hellenistic and Roman period.