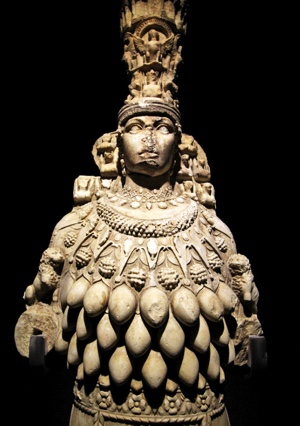 Both material and literary evidence reveal the syncretistic and multivalent nature of the god- dess of the Ionian city of Ephesos. Artemis Ephesia, as the Greek appellation of an indigenous deity identified as Kybele or Hekate, retained many of the functions and traits of her Anatolian predecessor while also taking on aspects of the traditional Greek Artemis. Tied intrinsically to Ephesos, she was patron goddess and protector of the city, as well as an international guarantor of refuge for suppliants. She was also a liminal goddess, who was associated with transitions from childhood to adulthood (especially for girls). Lastly, she was a fertility goddess whose role as such became exaggerated as she was assimilated into the Pan-Hellenic religious tradition.