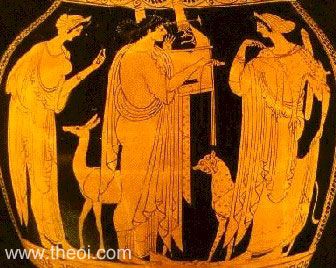 Traditionally we picture the nymphs as a band of lovely demi-goddesses who surround Artemis. This familiar im owes much to the famous simile at Od. 6.102-109 compa Nausicai and her companions to Artemis and the nymphs. Art is hunting on Mt. Taygetos or Erymanthos, and about her the n

dance (oaicou~t), and Leto is glad at heart because Artemis out as the most beautiful of all. As Burkert says, the Artemis "became the definitive picture of the goddess: Artemis with swarms of nymphs, hunting, dancing, and playing on mou and meadows."' Apollonius of Rhodes used a similar comp with Artemis and her nymphs to describe the beauty of going to meet Jason, and Vergil that of Dido about to meet A Yet this "definitive" image of Artemis belongs almost exclu to epic, and outside of Homer the association of Artemis an nymphs is surprisingly limited in Greek literature before the nistic period. In Hesiod, the Homeric Hymns, Pindar, Bacch and the extant lyric poets both Artemis and the nymphs are tioned frequently, but not in the same breath. Instead we fin nymphs linked with Dionysus, Aphrodite.....