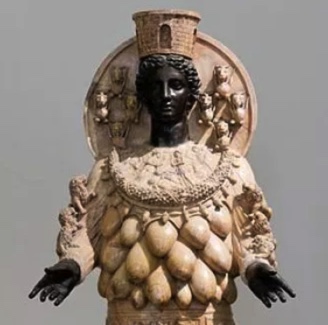 The ancient travel-writer Pausanias remarked that, “All cities worship Artemis of Ephesus, and all individuals hold her in honour.”[3] This was not an overstatement. The spread of the cult of Artemis Ephesia throughout the Greek world was extraordinary. By the late Hellenistic period, many cities within the territories ruled by the Greeks had a temple or shrine dedicated to the highly regarded goddess, or to a version of her.[4] However, it was the city of Ephesus alone that had a particularly strong and lasting bond with their goddess.[5]

Artemis of Ephesus was quite unlike Greek goddesses, and she had a unique and distinctive appearance.[6] This essay looks at the features of her dress, and at what these features symbolise. But it begins with a brief history of Artemis which helps to explain her importance and power.