Artemis Ephesia, the Emperor and the City: Impact of the Imperial Cult and the Civic Identity of Roman Ephesos (2016), Dies van der Linde 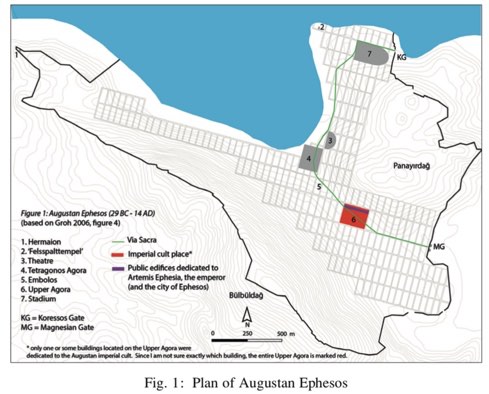 Roman Ephesos had a diverse religious community. Numerous studies have focused on one or several Ephesian cults, but few have emphasised the intertwinement of these cults. This article stresses the intimate connection between two of the most important cults of Roman Ephesos — the cult of Artemis Ephesia and the imperial cult — and the Ephesian civic institutions. Though approaching the cults as local institutions, and therefore acknowledging the power relations at play within the city of Ephesos, it also takes the involvement of the Ephesian community into account. The intertwinement of both cultic institutions and the city, summarised by the term ‘Ephesian triad’, becomes evident through my discussion and interpretation of the urban topography, the religious activities and the civic coinage of Roman Ephesos. In view of its connection with the cult of Artemis Ephesia, the rise and impact of the imperial cult in Ephesos had fundamental consequences for the communal civic identity of Ephesos: did Ephesos continue to be the city of Artemis Ephesia it had been for so long?