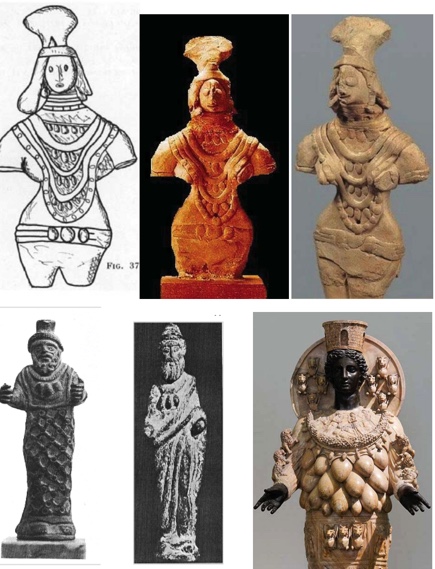 The cult statue of Diana Ephesia is a unique art object, which is very diff erent from other contemporary representations of gods. Th is goddess has a special socalled “multiple-breasts” pectoral ornament, which we can see mainly in the area of the chest, but sometimes it is positioned at the waist. Most historians started researching the Diana Ephesia’s cult statue and its history especially because of these interesting elements. Although many theories and interpretations existed about this statue, it is not clear when, and especially for what reason these “multiplebreasts” objects were created.

A lot of researchers are interested in the egg-shaped objects, which we can see under the area of the goddess breasts, or in the area between her breasts and her waist. Th ey are arranged sometimes one aft er the other, but sometimes they are hanging down, so we have several interpretations about these bumps on the statue. Th e most accepted theory believes that these bumps are “breasts”, but I would like to mention other existing interpretations and shortly present the research history of the cult statue of Diana Ephesia.

There is no consensus among scientists that these objects have animal or vegetal origin. Researchers, who believed in vegetal origin of Diana’s “breasts”, see the various fruits in them. For example Seltman and Karwiese consider them as dates, because the palm is oft en seen on the coins of Ephesus.2 3 Some researchers suppose that the “breasts” have animal origin, and therefore identify them with eggs (or eggshells), which can symbolize fertility.4 According to this interpretation these bumps are honeybee eggs, because Diana Ephesia is connected with the bees and we can see bees on the cult statue of the goddess, but also on the Ephesian coins.

The most contentious theory was the hypothesis of Gerhard Seiterle, who considered these hanging objects on the statue of Diana Ephesia as bull testicles.5 Seiterle pointed at the fact that these objects cannot be breasts, because they do not have nipples. His hypothesis could be theoretically acceptable,6 because in the ancient times the bull was the symbol of fertility.7 However, we do not have exact information about this kind of sacrificial rite. Seiterle’s theory was refuted by Dieter Zeller,8 but Seiterle’s interpretation became (aft er the “multiply-breasts” theory) the most frequently mentioned theory about the objects on the cult statue of Diana Ephesia. Th ere are researchers who think that these bumps on the Diana’s statue have Hittite origin and they connect them to the Hittite culture. Simon notes, that “the Hittite kursa was fashioned into a bag, this sacred sack was an animal origin and could be made of ox, sheep, or goat hide.

The kursa was fi lled with objects signifying abundance and also political and military power.”9 Th e kursa belonged to the magical objects. It was the forerunner of two Greek magical objects: the Golden Fleece (the symbol of power and abundance, which is hanging down from the tree in the sacred grove) and the aigis (the symbol of the military power), which off ers a perfect analogy, because the aigis has also ambiguous interpretations.