The Artemision at Ephesos in Early Christian Times, Ulrike Muss 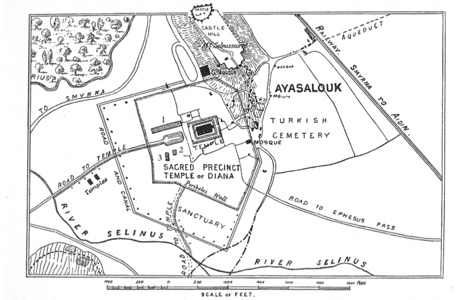 Huge remains of walls were what many eighteenth-century travellers were expecting to find as the remains of the World Wonder temple. Frequently, the ruins of the Harbor Gymnasium in Ephesus were mistakenly thought to belong to the Artemision.

For more than 1,000 years, the Temple of Artemis, the most celebrated shrine of classical antiquity, completely dis- appeared from view. The Temple of Artemis at Ephesus was the first mon- ument of the ancient East that Europeans and their governments set out to find, even before Heinrich Schliemann went to dig at Troy and Mycenae.

The man who went looking for Artemis’ temple was an English engineer working for the company that was building the first railway lines through south-western Turkey, The Smyrna and Aydin Railway Company.2 In his book Discoveries at Ephesus, published in 1877, John Turtle Wood describes his search for one of the seven wonders of the world, which he found on the last day of 1869 (fig. 1).3

In 1904/05 excavations in the Artemision were carried out by David George Hogarth together with Arthur E. Henderson, under the auspices of the British Museum. These excavations produced sensational results, as it was discovered that there existed older architectural installations in the temple’s court, even before the first large marble temple dating to the sixth century BCE. In addition, hundreds of mainly archaic objects, made of gold, silver, bronze and ivory, as well as coins, which are among the earliest we know, were unearthed during these excavations.

The Austrian archaeologist Otto Benndorf and the discoverer of the Pergamon Altar, the German Carl Humann, searched for the altar associated with the temple in 1895, but it was not until 1965 that it was discov- ered by Anton Bammer. At this time, excavations in the Artemision were reactivated after a long intermission. These continued until 1994. The focus of these excavations was also on both temples and the smaller archaic structures which existed before the first archaic monumental temple. Great attention was paid to the discovery of a small geometric peripteros in the courtyard of the subsequent temples (fig. 2) but also to much later structures and evidences which survived in the temenos of Artemis.