The geological background of the architecture in the Artemision of Ephesus, Anton Bammer, Luc Moens & Ulrike Muss 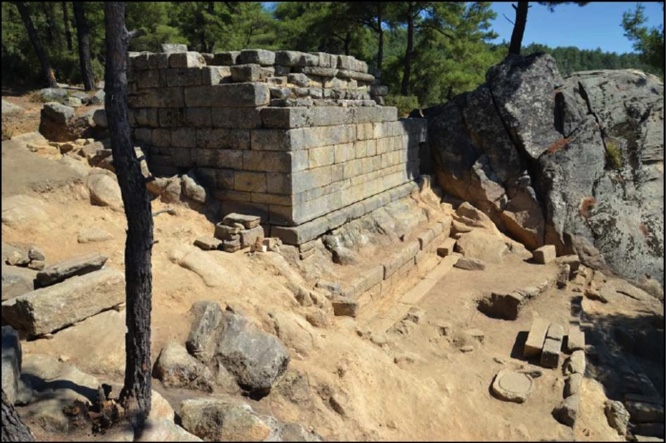 From the Greek mainland, particularly Attica a wide zone of marble continues over the cyclades to Asia minor with the cycladic metamorphic complex and the menderes massif to Phrygia (Fig. 1)1. There-fore towns and sites like ephesus, magnesia on the maeander, Priene, miletus, Didyma, sardis, Aphro-disias, Hierapolis, Pessinus and Aizanoi are built with marble. In the environs of ephesos many quarries exist meanwhile in Kolophon farther north there are none. It is a widely known aspect of Greek Architecture that its building material in most cases comes from its neighbourhood. But there exist also examples of wandering marbles, particularly of pre-viously worked material, for instance with the itinerant architecture in Attica2 or with columns at naxos which came originally from Paros3. In roman times the stones have often been transported by ship from far away, as the porphyr from egypt to rome or the dolomite perhaps from Thasos to ephesus.

The marbles for the temple of Artemis at ephesus came from its vicinity, especially from quarries close to the river Kayster (modern Küçük menderes) which flowed into the sea not far from ephesus (Fig. 2). The river served for transportation to the Artemision. The use of marble in the Artemision at ephesus is a rather late phenomenon. In the early Iron Age no marble seems to have been used for its architecture4. The extensive use of marble in the Artemision begins in the 6th century B.c. Literary sources reflect this new situation which implied new technologies. The history of the 7th and 6th century B.c. is also a history of technical inventions and shows how art and architecture give life to this material. so chersiphron invented the transport of columns with the help of wheels and his son metagenes the transport of architraves. new quarries in the region of ephesus – unknown until today – have been investigated during the last years. They reveal types of marbles which have been used ex-tensively during roman times and were than exported over long distances.

construction of the first building known to have used marble as a building material already began in the late 7th century on the west side of the temple of Artemis. The foundations of this building are likewise of yellow limestone but the rising walls were made of marble, as is proved with a block belonging to an euthynteria which lies in situ on the eastern founda-tions immediately in front of the west entrance of the archaic temple. The building was 34.40 m long, a dimension corresponding approximately to one hundred Ionic feet, and this led to its designation as hekatompedos (hundred footer)7. The Ionian foot which is the supposition for the name “hekatompedos” is immanent in the architecture of the temple of Artemis with its column span of 10 ells from archaic times until the 4th century B.c.