Demise of a harbor: a geochemical chronicle from Ephesus 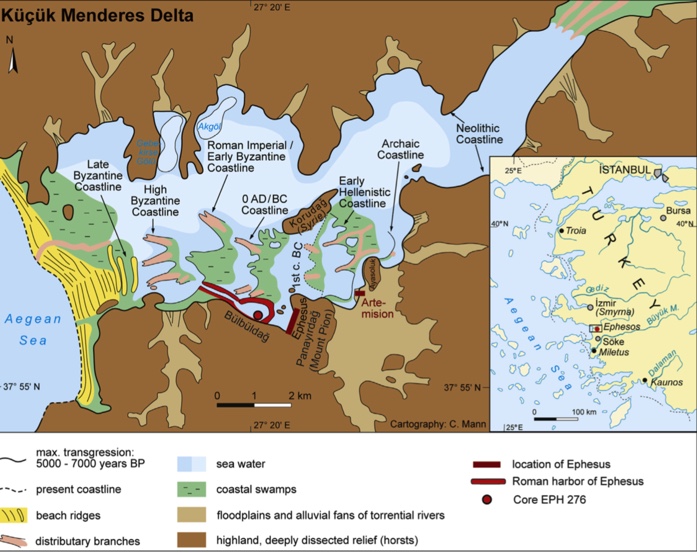 At the end of the first century BC, Ephesus became the Roman capital of Asia Minor and the most important commercial, religious, and cultural center of the region. In order to evaluate the status of anthropogenic fluxes in the port of Ephesus, a 12 m long sediment core drilled in the Roman basin was investigated to shed light on the paleo-environmental evolution of the harbor using grain size distri- bution analysis, 14C ages, major and trace element geochemistry, and Pb isotope compositions. With the help of complementary sedimentological data and Principal Component Analysis, five distinct units were identified which, together, reflect the different stages of water history in the harbor. Among the major disruptive events affecting the port were earthquakes and military events, both of which were partic- ularly effective at destroying the water distribution system.

Seasonal floods of the Cayster River (Küçük Menderes) were the major source of the silt that progres- sively infilled the harbor. Silting in was further enhanced by the westward migration of the river mouth. A single major disruptive event located at 550 cm core depth and heralding the development of anoxia in the harbor marks the end of the dynamic regime that otherwise controlled the harbor water throughout the Roman Empire period. This remarkable event may correspond to a major disruption of the aqueduct system or to a brutal avulsion of the Cayster River bed. It clearly represents a major disturbance in the history of life at Ephesus. It is poorly dated, but probably occurred during the reign of Augustus or shortly after. Lead isotope and trace metal evidence suggest that in the four bottom units pollution was subdued with respect to other Pb metal inputs, presumably those from aqueducts and natural karstic springs. Near the top of the core, which coincides with harbor abandonment and the more recent period, anthropogenic Pb contam- ination is clearly visible in both Pb abundances and isotopic compositions.