Recent Excavations at the Altar of Artemis in Ephesus, Anton Bammer 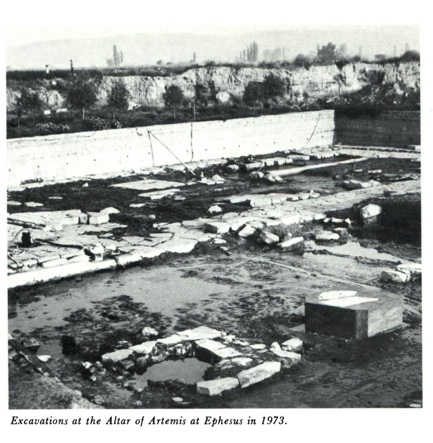 Recent Excavations at the Altar of Artemis in Ephesus One of the major cities of the ancient Mediterranean world, Ephesus is situated on the western coast of Turkey, near the modern village of Kushadasi. Extensive Hellenistic and Roman remains give testimony to the greatness which the city once enjoyed; among the ruins, one finds today the scant remains of the Temple of Artemis, a structure dating from the fourth century b.c. It ranked among the seven wonders that were famous throughout the pagan world. The history of the temple is a very complex matter.

Excavations at Ephesus began in 1869 under the direction of an Englishman, John Turtle Wood, who conducted his fieldwork there until 1874. Wood succeeded in locating the temple, which was completely buried, and more than twentyears later in 1895, the Austrian Archaeological Institute took up where he left off. Archaeologists from the Austrian Institute have worked at the site intermittently from then until the present time. They have uncovered vast portions of the Hellenistic and Roman city and have made some important discoveries in the Sanctuary of Artemis, otherwise known as the Artemision. It is on their most recent excavations that I make this report. The bulk of the Austrian work at the temple site followed that of an Englishman named G. D. Hogarth, who explored the temple during 1904 and 1905. Hogarth had to labor under extremely difficult conditions; the building was below the level of the water table, and he was forced to use pumps constantly. Despite such circumstances, he successfully unraveled several of the temple's construction periods.

Under the pavement of the Archaic temple he found some enigmatic remains from the seventh century b.c. It was he, in fact, who identified the Archaic or so-called "Croesus" temple, an impressive monumental construction which, according to historians, was left unfinished when the Lydian King Croesus conquered Ephesus in the middle of the sixth century b.c. Croesus destroyed the city but left the sanctuary untouched; he even donated several sculptured column drums to the temple. This temple burnedown some two centuries later and was replaced by the elaborate fourth-century construction which was destined to be called one of the wonders of the world. From the very beginning of the archaeological quest, investigators were searching for the altar of the temple. S trabo, the Greek geographer, recorded that the altar associated with the fourthcentury structure was filled with statues by Praxiteles, a statement which made the Austrian excavators particularly eager to find it. But not until* 1965 did a deep trench dug on the west side of the temple bring to light some of the foundations that belonged to the classical altar.

In the course of further investigations, additional information emerged about the earlier Archaic altar and even the early structures beneath it; but with each new find, new problems also arose, and very recent excavations have both illuminated these problems and posed fresh, intriguing dilemmas. Situated remarkably close to the sea's ancient shoreline, there is a fresh-water spring which seems to have served as a sacrificial place, possibly as early as the tenth century b.c. when the area was invaded by seafaring Greeks.

This site's proximity to the seashore may explain why the Greeks chose it. In any event, there are also remains of an ancient road which leads to the spring, and there are indications that a seventhcentury cult was located by it. Around the middle of the seventh century, the Ephesians built a small naiskos, or shrine, on this road, and in the course of our excavations we found the charred bones of animals burnt for sacrifice together with small votives and pottery sherds. The sherds included examples of the orientalizing and Corinthian styles, and among the votives was a bronze griffin similar to those from Olympos, Miletos and Samos, sites where griffins were used as protomes on large bronze vessels. We also uncovered several ivories. One, the lower part of a female, may be a fragment from a statuette of a priestess or a goddess, for it has parallels with several statuettes discovered by Hogarth. Another is an ivory ram with a cross-like incision, which was probably once attached to some larger object; indeed, it may have served originally as inlay on a throne together with several pieces of furniture decoration. Additional finds include afaience hawk and two polychrome terracottas, one a oriental-type head and the other aDaedalic statuette. The most puzzling of the finds from this particular vicinity is a group of transparent crystals, whose concave surface produces a reducing effect, that is a diminished image of the kind one sees in the bowl of a spoon.