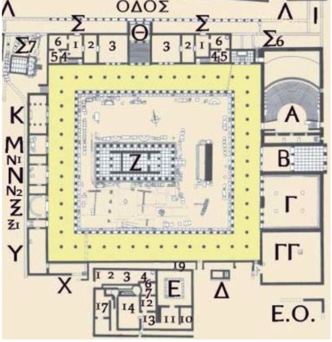 This thesis examines the relationship between ancient Greek religion, cult practice, sanctuary buildings and astronomy. Its geographical range extends across the modern territory of Greece; chronologically it covers the thirteenth to second centuries BC, from a period before the development of self-standing religious architecture to the most important phases of temple construction.

Data was collected from 125 structures, giving priority to sacred structures but also considering ‘secular’ buildings (hypostyle halls and stoas; for stoas, the extent of the interior illuminated by the sun at different times of year is calculated, to show the significance of orientation in conjunction with function). The hypothesis that there is an astronomical orientation in Greek religious structures is tested, and the data sample divided by geographic location, date of construction, and deity (distinguishing chthonic and ouranic cults). Case studies (Apollo at Delphi, Artemis Orthia at Sparta and Messene, the Erechtheion at Athens, Demeter and Kore at Eleusis, and a number of Thesmophoria) are presented in order to examine the sample in detail, taking into account mythology, cult, rites and the local total perceived environment (land, sky and horizon). The analysis shows that religious structures were, in at least some prominent cases, oriented towards stars and constellations, not the solar range as has often been claimed. Celestial bodies were significantly integrated with the cyclical ceremonies associated with a temple, the rites performed, and the deity’s attributes. This complex association of the night sky and landscape influenced the design, planning and orientation of religious buildings.

This study advances understanding of the role of landscapes in Greek religious practice, establishes the importance of astronomy and cosmology in ancient Greek religion, and demonstrates how this religious system was expressed at the local level in myths and the performance of cult rites.