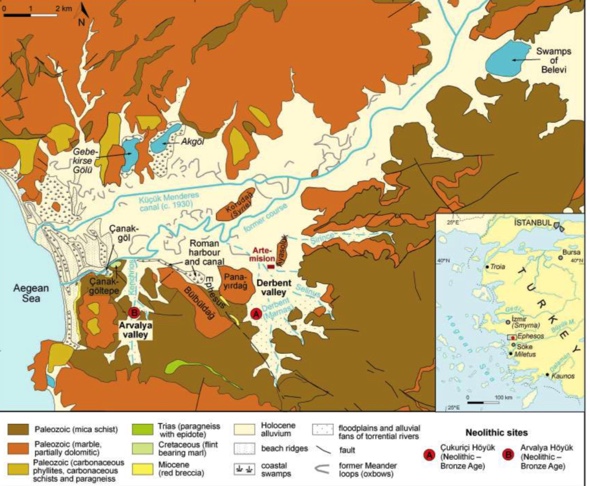 Ephesus was one of the most important harbour cities of the Roman Empire. This dissertation deals with the environmental changes of Ephesus and the Ephesia, i.e., the area surrounding the city (the so−called chora), with particular focus on (i) the detection of Holocene coastline changes along the Küçük Menderes graben, (ii) the investigation of Ephesus’ different harbours and settlement sites, and (iii) the reconstruction of the landscape evolution in the Ephesia especially  under  the  aspect  of  human−environment  interactions  since  Neolithic  times.  To achieve these goals, drill cores were retrieved from geo−bio−archives and analysed with sedimentological, geochemical, micro− and macrofaunistic, micromorphological, palynological and parasitological methods. Geophysical measurements and archaeobotanical investigations support these studies. The chronology is based on 14C age estimates, archaeological evidence (e.g., diagnostic ceramics) and historical accounts.

The results prove that the postglacial sea−level rise had created a marine embayment, which reached c. 20 km inland during the middle of the 6th millennium BC. When the speed of this transgression decelerated considerably, the Küçük Menderes river started to prograde its delta. Two phases of delta advance can be distinguished: a slow progradation with low sedimentation rates between the 5th and the 1st millennia BC (up to 1 mmƒy), and a much faster advance since then (c. 4−30 mmƒy). The most likely reason for this considerable increase is human activities (mainly deforestation).

Settling in the Ephesia started during the Neolithic period. Two settlement sites in the floodplains of the Arvalya and Derbent valleys south of the Küçük Menderes graben, Arvalya Höyük and Çucuriçi Höyük, date to the 7th millennium BC. These settlement mounds are located c. 1.5−2 km south of the former coastline.