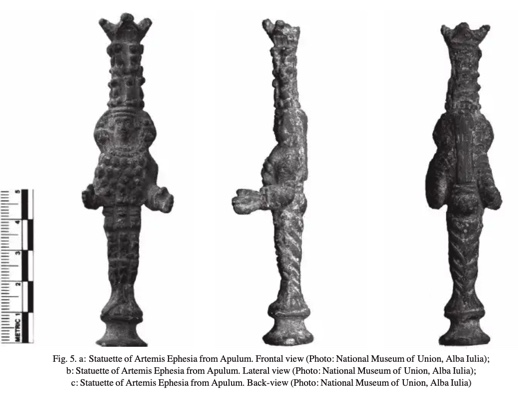 “But in the sanctuary of Ephesian Artemis, as you enter the building containing the pictures, there is a stone wall above the altar of Artemis called Goddess of the First Seat. Among the images that stand upon the wall is a statue of a woman at the end, a work of Rhoecus, called by the Ephesians Night” (Pausanias, Description of Greece. Translated by W. H. S. Jones and H. A. Omerod Loeb Classical Library Volumes. Cambridge, MA, Harvard University Press; London, William Heinemann Ltd. 1918).1

Ephesus became one of the most important religious centres of the Anatolian peninsula in the end of the 10th century B.C.2 From a small, local shrine built in the Geometric age the sacralised space was maintained till 263 A.D,3 surviving at least six major phases of construction,4 numerous floods and destructions5 and became one of the most successful and monumental example of maintaining a sacralised space, considered even as the “fifth wonder of ancient times”.6 The success of the Artemision had multiple reasons. The advantageous geographic position be- tween the Hellenic world and the Near East and Egypt created an economic hub in Ephesus and a local elite, who consciously used the sanctuary and the cult of Artemis from Ephesus after 356 B.C. as an important element on the growing religious market of the Mediterranean, creating various festivals, initiations in mysteries and exclusive games for the divinity.7 It was one of the eight sanctuaries in the whole Roman Empire, which legally was permitted to inherit property.8