The Function of the Roman Spectacle in Ephesos, Christos Potamianos 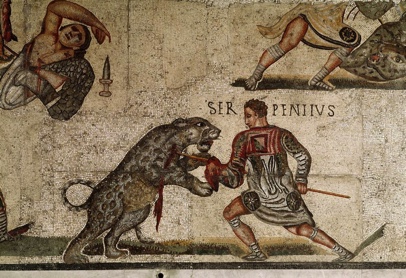 When Rome acquired the province of Asia in the will of Attalus III in 133 BCE, it was faced with a challenge: how to rule a hostile populace effectively while continuing to expand its hegemony elsewhere. The curtailment of civic liberties, the introduction of burdensome taxes, and the imposition of a Roman identity all contributed to building resentment among the new subjects. But subjection to Rome was not without its advantages. If a city was deemed compliant, Rome promoted, to a degree, native traditions and invested in its monuments and infrastructure. In newly acquired territories, the Roman authorities also introduced their preferred form of entertainment – the spectacle. The Roman spectacle has fascinated the modern imagination. For many, it represents a dark past for human history: a time when human life was of little value, when slaughter served to entertain bloodthirsty crowds, when depraved emperors manipulated mobs from towers of marble by the allure of gore and prizes, and when violence was institutionalized in sadistic rituals. Donald Kyle states that because of ―martyrology, historians such as Edward Gibbon, artists such as J.-L. Gérôme, novels and Hollywood epics such as Quo Vadis, the enduring image of Rome will forever be stained with the blood of the arena‖ (3).

Until recently, scholars had viewed the spectacles in a similar light, and when trying to account for their popularity in the East, have attributed Greek acceptance of the games to the seductive qualities inherent within them. Though this is true to an extent, it ignores some deeper issues that are at play. An examination into how the Roman spectacles were received at Ephesos can shed answers to the larger context involving the Greek-speaking East and Roman shows. Ephesos played a prominent role for the Roman Empire in the East. According to Strabo the Geographer, ―because of its advantageous situation, [Ephesos] grows daily, and is the largest emporium in Asia this side of the Taurus‖ (14.1.24). Its level of preservation also makes it an invaluable source for information about Antiquity. Yet students of the Roman spectacles have largely ignored this important city. Much of the scholarship on Ephesos has focused on its relationship with Christianity – a driving factor in the area‘s current tourism industry. G. H. R. Horsley acknowledged this fact in the introduction to his work on the city when he wrote that ―for the contemporary tourist with an interest in antiquity [...] [and] for the student of the New Testament, Ephesos is a name to conjure with‖ (106). The ―century-long archaeological attention‖ that Ephesos has received, shows it to be representative of other Greco-Roman cities that have not received the same attention. The city‘s spectacles, however, have been largely ignored in the rich scholarship produced on the city and the greater part of the Greek East. For this reason, a study of the function of the Roman spectacle in Ephesos can be useful in better understanding the city itself and the border lands of the Roman Empire as a whole.

Traditional scholarship has tended to view the relationship between Rome and its Greek subjects assuming that the identities developed by each culture were mutually exclusive and could not coexist with the other. This assumption led to the view that panhellenic cultural traditions and practices predisposed Greeks to reject Roman sensational exhibitions in favor of their established athletic games and theatrical productions.