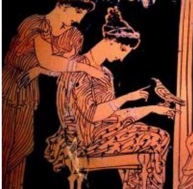 This thesis will examine the nature and function of virginity in the service of Artemis. It will look at two famous virgins in classical literature, Iphigenia and Hippolytus, the girls called “bears” in the festival of Artemis at Brauron, the virgin choruses of Artemis in Sparta, prophetic and sacrificed virgins, abducted and dead virgins in Ovid (Daphne, Callisto, and Philomela), and the virgin goddess Artemis herself. Whereas previous studies emphasize social and legal aspects, arguing that virginity mattered in order to legitimize offspring and marriage, this study will attempt to demonstrate that virginity was originally largely a religious concept and that it occupied a significant place in ancient society, at least as reflected in literary sources. In classical antiquity, however, the chiefly religious properties of virginity became intellectualized as purity and chastity among poets and philosophers. Euripides and Plato were two early proponents. These concepts in the realm of ethics were further developed by pagan philosophers in late antiquity. Early Christian writers, who were heavily influenced by contemporary philosophical teachings, subsequently reclaimed virginity, purity, and chastity as religious properties in the service of God.