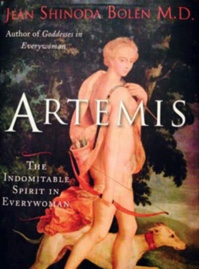 Jean Shinoda Bolen has contributed greatly to our understanding of feminine psychology, with thirteen books to date in eighty foreign editions. Her latest offering, Artemis: The Indomitable Spirit in Everywoman, explores the emergence of a growing archetypal representation for women—that of the passionate pathfinder and committed activist. Our growing fascination with Artemis, Bolen persuasively argues, is linked to the gains of feminism, recent shifts in gender roles, and a rise in grassroots women’s movements.

In Greek mythology, Artemis was a hunter with an unerring aim, known for helping the defenseless and punishing the cruel or unjust. Strong and self-sufficient, the goddess was an advocate for women and young girls. She was called on to ease the pain of childbirth. (The herb, Artemisia, used for this purpose, was named for her.) As guardian of wilderness and small animals, Artemis might be regarded as the first environmentalist. And, as Apollo’s twin, she valued egalitarian relationships with men.

When asked by Zeus what she valued most, Artemis cited independence. Modern feminists sought to follow in her footsteps. In the mid- nineteenth century, suffragettes launched first- wave feminism in Britain and the United States. That era produced Artemis heroines like Gertrude Bell, an English writer, administrator, and spy who shaped the current borders in the Middle East; and Alexandra David-Néel, the first Westerner to explore Tibet. In the mid- twentieth century, second-wave feminists like Betty Friedan and Gloria Steinem emerged as Artemis-advocates, fighting for women’s reproductive freedom and equal opportunity in the workplace. With more education, better paychecks, and access to family planning, today’s young women have more chances than ever to live out this self-reliant archetype.