From Artemis of Ephesus to Mother Mary

Written by Paul
Published in Agora: Market Place of Ideas 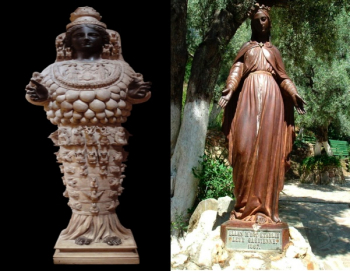 It is argued, and believed, by many that early Christianity struggled to replace the love and adoration that abounded in the day for the great Artemis. Only in 431, at the Council of Ephesus (held at Church of Mary in Ephesus) did the church manage the transition. It was then that, in seeming desperation, they proclaimed Mary the mother of God, Theotokos. Hence one eternal virgin (Artemis) was reincarnated as a modern virgin, Mother Mary....fait accompli... fasten your seatbelt....

May the real Artemis please stand up....

Written by Paul
Published in Agora: Market Place of Ideas 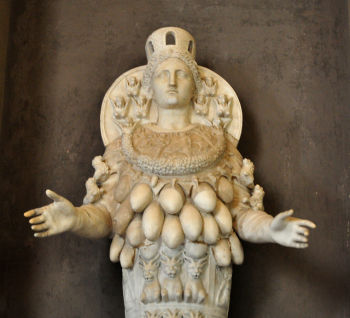 As the Roman empire gradually displaced the Hellenic Greek empire there was a full cross-pollination of the deities belonging to the two tribes. Only Apollo managed to keep his name and form in this translations process. And for Gods that the Romans may have lacked they adopted number of Goddesses of Anatolia (a number with pre-Hellenic origins): Kybele and Hecate are good examples. And Artemis of Ephesus, as we will argue, was also incorporated into the Roman celestial hierarchy.

It is generally believed that the Goddess Artemis of the Greeks was effortlessly renamed Diana by the Romans in a full transference of both function and form.

The huntress, ever armed with a quiver and bow, was the lovely daughter of Zeus and Leto, sister to Apollo and protectors of the earth. Often dress in a revealing tunic, she was the guardian of nature, the night, and the moon. She is counted as one of the great Gods of Mount Olympus whose biography and exploits are laid out in Homer’s Iliad and Odyssey.

But the Greeks, dating back over 700BC celebrated two distinct forms of Artemis. The Artemis of Ephesus, the majestic and austere Queen of heaven and earth, has little in common with her appellation as the nimble, sparsely clad, huntress. Conflating two divergent Goddesses into in single whole, first by the Hellenic Greeks and carried on by the Romans, has been — to say the least — fully befuddling.

So, one would think as the Romans displaced the homogeny of the Greeks that the only Artemis that prevail would be in the form of Diana: their family tree of Gods does not include Artemis Ephesus. Following that logic Artemis of Ephesus would slowly retreat of the heavens and the hills. But Artemis designs her own fate.

I can not hide my adoration and affection for the Artemis of Ephesus. And as much as I would like to fully credit the Greeks for her glory and mystery, I can no longer.

It seems the Romans inherited the perplexing schizophrenia of Greeks in regards to the Goddess. As the Greek honored two parallel Goddesses, saddled with the identical name of ‘Artemis’.

The finest Artemis of Ephesus sculptures surviving were produced by the Romans. The two on display in the Ephesus museum on Selcuk, the Beautiful Artemis and the Great Artemis were both crafted in the 1-2nd BC under the Roman reign.

The wonderful Artemis found at amphitheater in Leptis Magna is a Roman copy from c. 120 BC. The Artemis kept at the Vatican Museum is, as well, a Roman copy dated from the 2nd BC. All of the Black Artemis that I have tracked down, 5-6 in all, were created by the Romans in the between the 1st and 3rd BC.

So, we need to credit the Roman for contributing to our understanding of Artemis of Ephesus. The Roman artisans, no doubt, were inspired by the Greeks, and they beautifully enhance our appreciation of Artemis, by adorning her in a vast array of attire, gracefully revealing her cosmic origins and authority.

This is not an easy confession on my part, as the Roman treatment of the earth and animal kingdom (all under Artemis’ domain) was brutal. That that Roman embraced Artemis of Ephesus — alongside Diana — speaks more to her enduring and compelling nature.